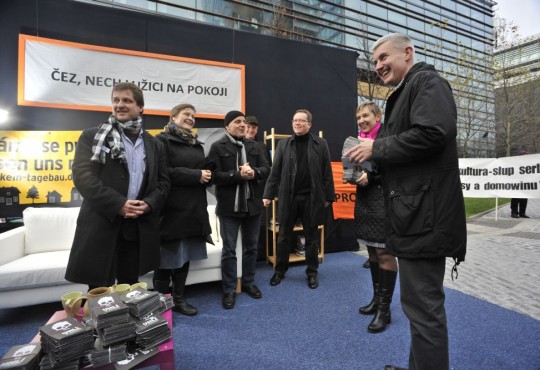 Supported by the Green members of parliament Heide Schinowsky (Brandenburg) and Dr. Gerd Lippold (Sachsen) Lusitanian initiatives have staged a protest in Prague in front of the headquarters of the state-owned energy group CEZ against the purchase of Swedish-owned Vattenfall's lignite sector. Under the slogan "We will not sell ourselves" the Lusitanians called on potential buyers, not to invest in new opencast mines. Thousands of people are at risk in Brandenburg of being expropriated and resettled in the case of new opencast mines – a practice that is prohibited in the Czech Republic. To date, in addition to CEZ, the Czech companies Czech Coal Vršanska uhelná and EPH have expressed an interest in the Lusitian coal division. While Vattenfall is hoping for a revenue of 2 billion Euros, industry experts are presently expecting a significantly lower net value. A recent report from the market experts Energy Brainpool concludes that Vattenfall‘s lignite business today will present a negative contribution margin as of 2022. The monetary value and purchase price for the Vattenfall division when considering the climate protection requirements today is at best at 500 million Euros. Based on these figures, an investment in the Lusitian coal division is a "high-risk business", according to the Greens.

"Electricity generation from brown coal’s importance is shrinking due to the energy turnaround and the company is no longer willing to bear the million Euros follow-up costs of coal mining. In addition, coal is the most climate-damaging energy source, "said Dr. Gerd Lippold from Saxony. The energy policy spokesperson of the Greens in the Brandenburg Parliament Heide Schinowsky pointed out that potential buyers would have to adjust to the fact that state and federal policy in Germany will continue to restrict the conditions for the coal. "The aim to reduce the lignite power for climate protection reasons are advancing at the federal level. In addition, there several states are putting much effort into holding mining operators accountable and financially responsible for the burden of the costs of the consequences of lignite mining "Schinowsky said. Study Energy Brainpool (engl.) http://www.energybrainpool.com/fileadmin/download/Studien/2015-10-20_Greenpeace_Study_on_Lignite_Power_Plants_EnergyBrainpool.pdf